We Care about Clean Safe Fun 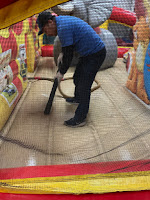 Magic Jump Rentals has always prioritized clean and safe fun! We take hygiene very seriously and for the past 24 years, we take pride in our company's reputation of delivering the best quality rentals. We clean all of our products daily and after every use. No product is used in more than one event or location on the same day. The product must be vacuumed and cleaned before going out for another rental. All rentals that are stored away for a long period of time must be re-cleaned. Here is a look at our detailed and thorough cleaning process. 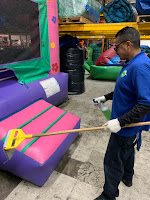 Step 2: Once the vacuum process is complete, the entire unit is sprayed with a combination of Clorox disinfectant and Simple Green All purpose Cleaner.

Step 3: The outside and inside of the unit are cleaned, scrubbed and wiped down. 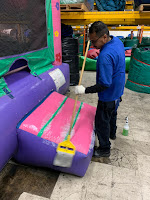 Step 4: Once the unit has been dried, it is rolled up and stored, ready to go out for the next rental.

This process is done every day, after every use of each rental. We have always followed strict procedures when it comes to cleaning our products to ensure you, our customers, get the best, clean quality rentals.
Posted by Elizabeth Vazquez at 1:03 PM 2 comments:


Believe it or not, it IS possible to throw a “beach party” in February. Tricky? Yes. Impossible. No.
Emma had her heart dead set on a beach party theme, and I didn’t have the heart to tell her no. So off to Pinterest I went. There were a lot of cute ideas I wanted to implement, so if you’re ever in a jam, seriously Pinterest is a miracle worker! The main highlights for Emma’s party according to Emma had to be:

That didn’t seem like too bad of a list, and I am so happy to report that all of her requests were met. When it came to the bounce house, there was no other company I would go to other than Magic Jump Rentals. If you read my previous blog post about Kensey’s Frozen themed party, you know just how awesome they are! I wouldn’t count on any other party rental company for my events. 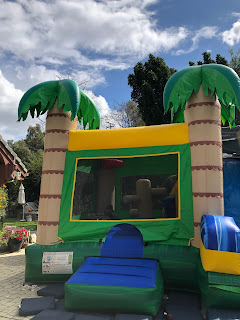 After preparing for this party for weeks, I felt like I had everything ironed out. Then the weather decided to throw a curveball at me and anticipate rain on the day of the party. With only a few days to spare before party day, I needed to figure out entertainment for a few dozen kids, and FAST. I contacted Magic Jump Rentals to see what my options were. I learned that due to safety reasons, they won’t deliver bounce houses when rain is present. They did however offer me four carnival games in exchange, which was music to my ears, because that will entertain the kids for hours, all while staying on theme. The carnival games reminded me of the fun boardwalks by the beach, so it completely worked! I was so relieved to have worked with a company that was so fast to fix the issue, and not leave me hanging without a plan. It completely turned the party around! I also ordered some “sand in a bottle kits” for each kid to create as a backup plan for the rain. No one was going to be bored on my watch.
The weather was at a 50% chance of rain come the night before the party, so we decided to play it safe and bring on the carnival games. I woke up on party day with a clear idea of how the party was going to go, and then the rain disappeared completely from the weather app! I quickly called Magic Jump Rentals and scheduled the original jumper to be delivered again, but let’s add a few carnival games, because I seriously moved furniture for this concept. I was relieved that the kids would have the bounce house she originally wanted, but now we have some extra fun to make this party complete. Again, Magic Jump Rentals was a BIG reason this party went to smoothly, so I can’t thank them enough...
To read more of her blog you can visit balancingblocks.blog
The product that was used for this themed birthday party was our Tropical 5in1 Combo.
Posted by Elizabeth Vazquez at 9:00 AM 2 comments:

Magic Jump Rentals will have a total of six branches servicing throughout Southern California. We have the ultimate selection of jumpers, slides, interactive games, inflatable combos, carnival games, LED furniture, tables, chairs, concession machines, and more. We pride ourselves on providing the best quality fun to our clients. "We Deliver Fun!"

The Antelope Valley Branch will be servicing areas like:
And other neighboring areas!

The San Diego County Branch will be servicing areas like San Diego:
And other neighboring areas! To check and see if Magic Jump Rentals delivers to your area, enter your zip code on the website. 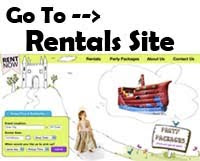